On Tuesday, 5 April 2016, chimpanzee Mama died at the age of 59 years old at the Royal Burgers' Zoo. She was the oldest chimpanzee in the Netherlands. In all of Europe there are only two chimpanzees that are older. It is estimated that Mama was born in the wild in 1957, after which she lived at the German Zoo of Leipzig for years. In 1971 Mama, together with the chimpanzee females Gorilla and Franje, came to Arnhem, where they formed the new chimpanzee colony that would become world famous.

For the first time in Zoo history several adult chimpanzees were kept together in one area. Experts and zoo directors predicted a major disaster, but the skepticism quickly changed into admiration. Under the direction of behavioural scientist and Professor Emeritus Jan van Hooff, studies on the chimpanzee colony were done for many years. Especially due to the ground-breaking behavioural research of Frans de Waal, currently an internationally known primatologist, Mama became famous for her dominant and influential role in the chimpanzee troop. In chimpanzee terms 59 years old is a very advanced age.

“Many people I have given tours to, after lectures and with training courses, have known her. When we arrived at the chimpanzee quarters, Mama always came running towards me from the farthest corners to excitedly greet me from the other side of the moat in chimpanzee language with a loud panting ‘oohooh!’. This past year it became more and more difficult. Each time it took her longer before stumbling she reached the moat. I will definitely miss her.”

In her glory days Mama was at the absolute top of the chimpanzee females within the Arnhem chimpanzee troop. In his widely acclaimed book Chimpanzee politics Frans de Waal even calls her ‘the oldest and undoubtedly most dangerous female of the troop.’ In a chimpanzee troop the males are indeed the boss, but an alpha male won't last long without the support of the females. Mama ruled her females with a firm hand. When a few adult males were introduced, they were severely affected by it and only after Mama and Gorilla were temporarily separated, a new social ranking occurred. After her return to the troop Mama reluctantly had to accept this. Despite her name, she was a lousy mother. In some cases her babies even had to be raised with the extra help of the caretakers. At a later age she was appreciated by her peer group for her reconciling skills and her mediating role with conflicts. Her whole life she maintained a high position in the troop, although her granddaughter Morami had taken over her central role for a number of years already. 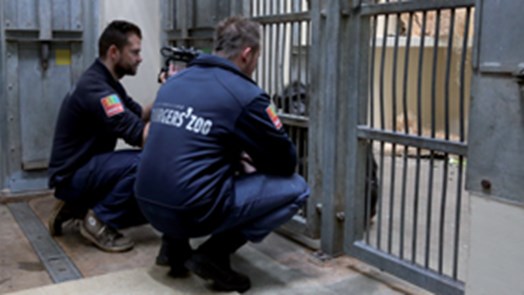