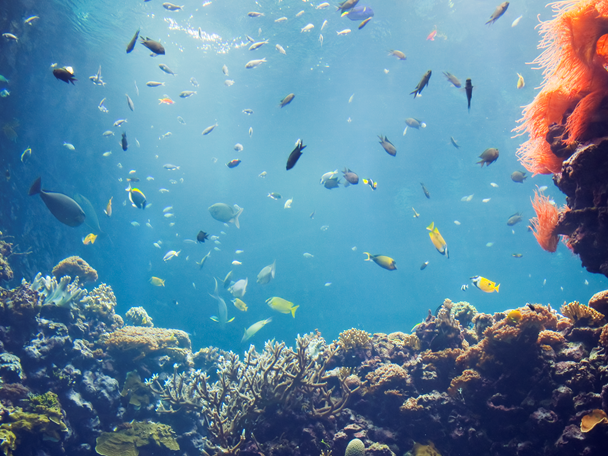 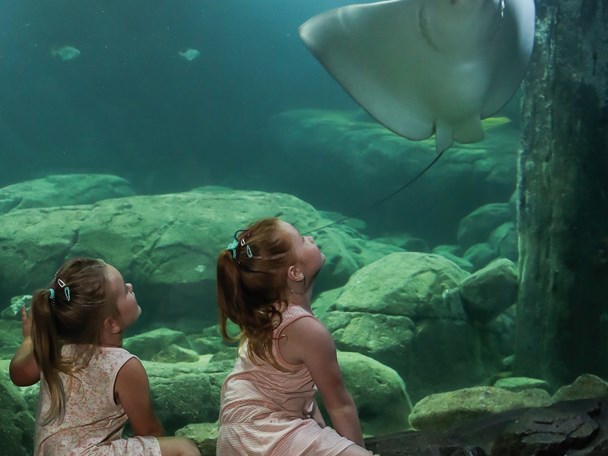 Descend along the reef

The exploratory voyage to the tropical coral reef starts at a beach, near a tropical lagoon where the water is still shallow. Following the path takes you deeper below the surface, where you arrive at the living coral reef along a reef gorge with mysterious moray eels. Suddenly, you are at the edge of the reef, looking through a huge panoramic window, where you come face to face with various species of shark that appear and disappear into the infinite depths of the open sea at will. The tour slowly brings you back to the surface, past barracudas and schools of horse mackerel, until your jaw drops in marvel at the eagle rays and stingrays swimming gracefully overhead at the harbour.

Burgers’ Ocean shows life in a coral reef in the Indo-Pacific, one of the most species-rich habitats on earth. These reefs house a concentration of life in the otherwise fairly nutrient-poor warm seas. Numerous species of fish and other animals live in and around the reef, including sea urchins, shrimp, sea cucumbers, worms and anemones. 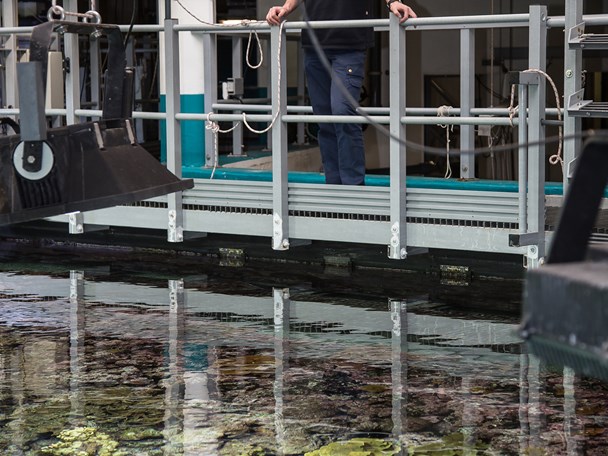 Humankind is learning more and more about life in the sea, but a lot is yet unknown. To that end, we conduct a lot of scientific research in the Ocean, collecting all manner of data from our animals. The knowledge and skill needed to grow corals, for example, could prove vital to the protection of coral reefs in the wild in the future. Breeding corals is difficult, as a coral colony consists of tens of thousands of very small animals which are highly sensitive to minute changes in their environment. Light levels, water quality and flow, the type and amount of food available—everything has to be perfect. Even the smallest deviations could have a fatal outcome. Our team of biologists and zookeepers have been successfully breeding both soft and stony corals for years.

Burgers’ Zoo is also the largest breeder of spotted eagle rays in the world and has had success in breeding other ray species and some shark species. A lot of research is still needed, even into these more familiar cartilaginous fish species. From genetic analyses to determine the exact subspecies of ray you are dealing with and optimise the breeding programme through paternity tests, to setting the body condition score for sharks. We also conduct extensive research into water quality and optimal filtration techniques; insights and available techniques are constantly changing.

At Burgers’ Ocean, visitors can enjoy the impressive, rich, living coral reef. But are corals plants or animals? A coral is an animal—or rather, an entire colony of small animals called polyps. In most of the coral species in our Ocean, each polyp lives together with a plant: a single-celled alga. The alga produces sugars using photosynthesis, some of which it gives to the coral polyp as a sort of “rent”. Corals can be subdivided into two main groups: soft corals and stony corals, which form the base of a coral reef. Vegetable plankton is essential to the ecosystem and serves as food for many fish species and other animals. Undesirable algae species must be removed from the windows by divers. We also make sure that algae do not have the chance to overgrow the coral and block the sunlight.

Because there are so many species in the coral reef, the ecological niches are narrow. In other words, each species has its own speciality. Every animal plays an individual role in the ecosystem, resulting in a biological balance.  Striking colours and unusual shapes help the numerous fish species identify their conspecifics. Some fish species, such as damselfish, can be found in abundant shoals, while other species are represented by just one or two individuals in the area. The various species each have their preference for swimming at the top, in the middle or at the bottom of the basin. Some of them like to hide in crevices, while others usually swim freely. The species also differ in terms of nocturnality and diurnality. Because Burgers’ Ocean represents a single ecosystem, you may encounter certain species of fish in multiple places.

Latest news about the Ocean 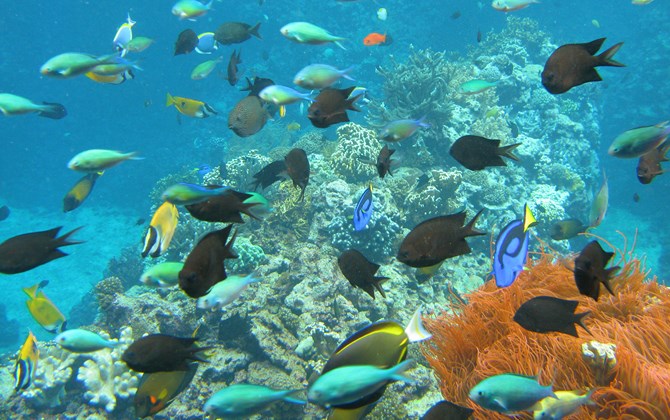 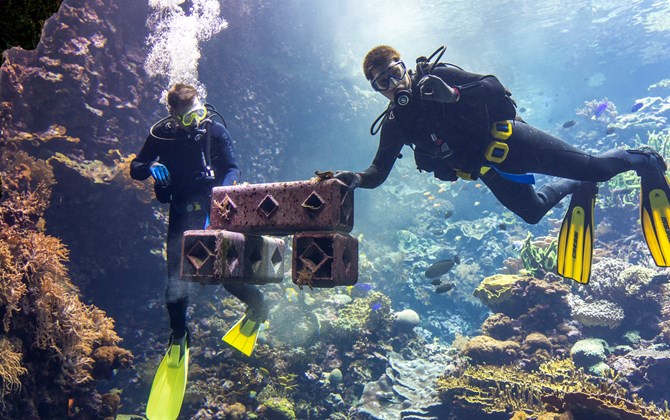 Burgers’ Ocean breeds coral for all of Europe