Is that a manatee?

For over 26 years Royal Burgers' Zoo maintains a large nature reserve with a tropical forest, lagoons and mangroves in the northern part of Belize. In this article we will introduce you to an animal from Belize: the manatee.

Well... not quite the same

The manatees that swim at Burgers' Zoo belong to the species 'Caribbean manatee'. This species is subdivided into two regional varieties, or subspecies: The Florida manatee (which we have at Burgers' Zoo) and the Antillean manatee, which lives along the coast from Central America to halfway Brazil. Are these two subspecies easy to tell apart? Alas... the literature is quiet in this regard.

Either way it is difficult to get to see manatees in their natural habitat. However, if you have seen manatees in shelters both in Belize and in Florida, some differences are noticeable. According to sources in the literature the adult Caribbean manatee weighs between 200 and 600 kilograms. I suspect that the Florida species weighs closer to 600 kilograms and the Antillean ones closer to 200 to 300 kilograms, because the first thought that comes to mind when you see an adult Antillean manatee is: they are so small!

In addition, the manatees that swim along the coast of Belize definitely look hairier than their kind from the US. It isn’t like they really have fur, of course, but across their entire body, at about every square centimetre, they have one stiff hair, which is a few centimetres long. Because also very small algae seem to grow on them, this 'hair' becomes very noticeable. On their prehensile lips, however, they appear to have a lot fewer whiskers than the manatees in the Bush.

Both subspecies of Caribbean manatees are threatened with extinction: it is estimated that of each subspecies there are only 2500 manatees still around. In such a small population each one counts for the survival of the species. That is why they do not let nature take its course when a manatee is in need. Regretfully manatees in the wild do sometimes collide with the propellers of motorboats. These collisions result in ugly, often life-threatening injuries. Sometimes also very weak manatees are found, especially in winter, as these warmth-loving creatures lose too much body heat in the colder water. Employees of our Belize project keep the coast clear by means of patrol boats and counteract illegal activities like fishery. When they come across a wounded or weakened manatee, it is taken to a special manatee shelter, which is located only a few kilometres from the headquarters of the project. 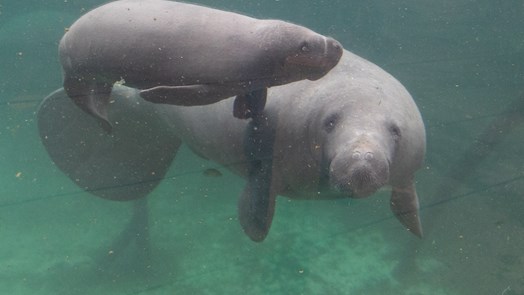 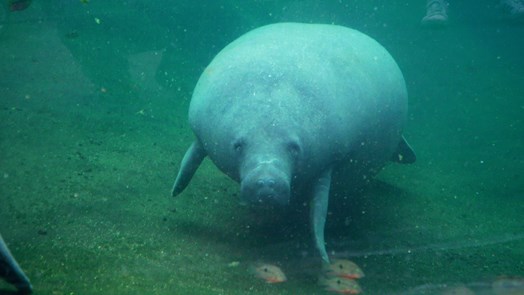 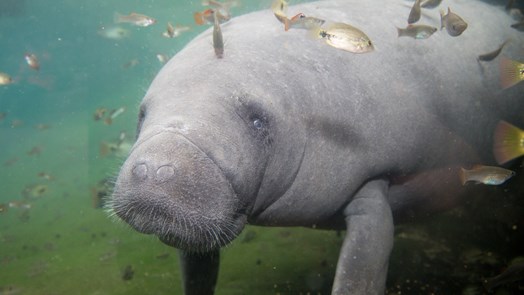