The covered tropical rainforest, Burgers’ Bush, of Arnhem’s animal park Royal Burgers’ Zoo, houses the world’s largest Dracaena collection. Dracaena cinnabari is also known as the Dragon blood tree. Botanist and Dracaena fanatic Theo Damen recently made a remarkable discovery in the Bush: a species of Dracaena that was still completely unknown to science. The plant’s abnormal growth and inflorescence set Damen on the trail of his discovery, which has officially been a scientific fact since publication in the May 2018 issue of the ‘Journal of Plant Taxonomy and Plant Geography BLUMEA'. Theo Damen has named his find Dracaena bushii, both in honour of his great inspirer Jan Just Bos and the site Burgers' Bush. Bos gained national fame as a presenter of the Dutch television programme ‘Ja, Natuurlijk' (yes, of course) and as a botanist, he had a predilection for plants of the Dracaena genus. Burgers’ Zoo acquired the complete Dracaena collection from Wageningen University in 1999, which has since been supplemented with plants from various expeditions by, among others, C. Jongkind and Theo Damen. As a botanical garden, Burgers’ Zoo houses several national plant collections, including the Dracaenaceae. Together, these collections in Arnhem and other Dutch gardens from the National Botanical Collection, form the Netherlands’ Green Treasury.

An adventurous plant: from Afrika to Arnhem, via Wageningen

On 2 October 1962, Mr Breteler collected live material from an unknown Dracaena in Cameroon. The material was taken to Wageningen University, which had an enormous collection of numerous Dracaena species. In 1999, the plant moved—still nameless—with the complete Dracaena collection from the University to the covered tropical rainforest Burgers’ Bush in Arnhem. In the Bush climate, the Dracaena grew into an adult plant. This is when, Theo Damen—who has been researching this plant family for years—noticed the difference in growth and blooming.

Damen has collected more than 13,000 digital copies of herbarium sheets from living plants in the wild. These sheets contain as many external characteristics of a plant as possible. Most of the taxonomically important characteristics are often found in the flower, however, Dracaena’s herbarium sheets often do not contain flowers or inflorescences. Dracaena species only bloom at night, with specific moths pollinating the plants. Scientists usually collect their material during the day. For a long time, the Dracaena bushii managed to hide its nocturnal secret from science.

Discovered due to abnormal inflorescence

The Dracaena bushii has been observed in the Bush for many years. This also made it possible to study the long-awaited inflorescence. In addition to the Bush, the Dracaena also bloomed in Meise Botanical Garden (Belgium), to which Burgers’ Zoo donated a cut in the past. In 2013, Damen noticed that the plant in the Bush was growing differently. What distinguishes this plant from others of the same species is its fan-shaped growth, comparable to the growth of the well-known traveller’s tree. In addition, this species of Dracaena has overlapping leaf attachments, forms a trunk, and develops aerial roots. Dracaena bushii can only be found in a few places in Central Africa, enough reason to continue to cherish the plant in Burgers’ Bush. 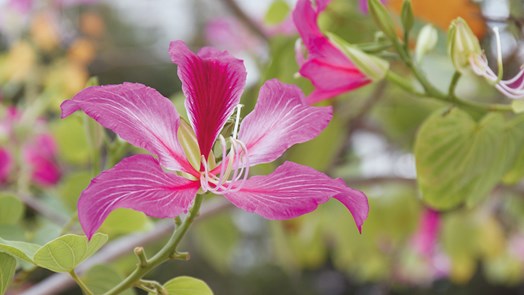