As a crowning achievement, we released the first five homebred fiddler crabs into the public arena at the Mangrove on Thursday 16 September 2021. Breeding fiddler crabs is a very meticulous, delicate process that is globally still pioneering. The tiny larvae eat tiny animal plankton and require precise water quality, temperature and water movement.

The reproduction of fiddler crabs

We are highly successful at reproducing fiddler crabs, both in the public area on the mudflats in the Mangrove and behind the scenes in a specially designed breeding station. Fiddler crabs mate in burrows on the mudflats, after which the female produces a clutch of fertilized eggs. A clutch is a minuscule cluster of eggs, which the female keeps in a mass on the underside of her body and constantly provides with fresh water and cleans.

The crucial moment to act fast

After about one and a half to two weeks, the females sprint to the water to deposit the eggs, which hatch soon after as tiny larvae. As soon as that happens, the zoo keepers must respond as quickly and efficiently as possible. The larvae are fished out of the water and taken to another location to prevent them from ending up in a filter or being eaten, which is likely in the public area.

Difficult challenges throughout the process

The tiny larvae eat tiny food; Brachionus, a type of animal plankton. Brachionus, in turn, feed on tiny plant plankton, also known as phytoplankton. It is also important that the larvae remain floating by creating a constant, very subtle current in the water. Caution and accuracy are essential for the survival of the exceptionally sensitive and fragile fiddler crab larvae.

"This was a unique experience. Since so much is still unknown about the breeding of fiddler crabs, we had to learn a lot through trial and error," explains zoo keeper Tim te Vruchte of the Mangrove team led by biologists Max Janse and Nicole Grol. "Many aspects of breeding fiddler crabs have never been scientifically described to date. The work we are doing is pioneering." 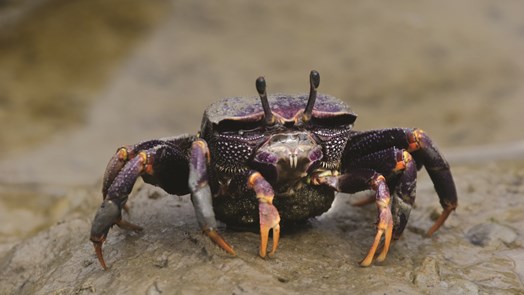 Breeding fiddler crabs is the work of pioneers