When designing a modern animal enclosure, we start by carefully studying the natural behaviour of the animal that will live in it. What does the animal need? Can it retreat out of sight if it wants to, for example? Animals native to tropical rainforests require access to heated indoor enclosures as soon as it gets too cold outside. We also try to stimulate the animals’ natural behaviour by surprising them with various forms of behavioural enrichment. In this edition: how we stimulate chimpanzees with food dispensers.

Chimpanzees are highly intelligent apes. They share more than 98 per cent of their DNA with humans. Famous behavioural scientists such as Frans de Waal and Otto Adang have researched the Arnhem chimpanzees and written groundbreaking publications on the topic. Since the start of the chimpanzee troop in 1971, the animals have continuously attracted the attention of behavioural scientists from all over the world. We have been working with Utrecht University and Wageningen University on behavioural research on various animal species for many years. Almost without exception, those studying the chimpanzees are students of or affiliated with Utrecht University, as there has always been a strong connection there through Professor Emeritus Jan van Hooff.

At the time of writing, a student is conducting behavioural research on our chimpanzees. She is conducting her research in several stages, partly because of the design of the research and partly because we are taking extra strict precautions with the apes due to the coronavirus. The student is working with two special boxes, each with two compartments. One compartment contains a tasty reward for the apes, and the other contains the equipment to operate the mechanism remotely. When the chimpanzees open the top flap, they can retrieve a small reward from the box. At the touch of a button, the researcher can remotely set up the next reward. As it turns out, the apes are nuts about dried corn.

When the intelligent apes quickly get the hang of the trick and know how to collect the reward each time, the challenge is increased a little further. The crate will be mounted off the ground on a fairly thin post. Raising the box prevents the apes from sitting next to the box to open the lid. They have to sit on the box, which in turn prevents the lid from opening. They have to understand that their own body weight is standing in the way of success and use acrobatic movements to find a body position that allows them to open the lid. The animals also catch on to this new challenge quickly. It is interesting to see that chimpanzees react differently as individuals. Just like people, some animals are faster and more adept than others. The box is a nice enrichment for the chimpanzees; scientifically, the student is testing “body awareness”. 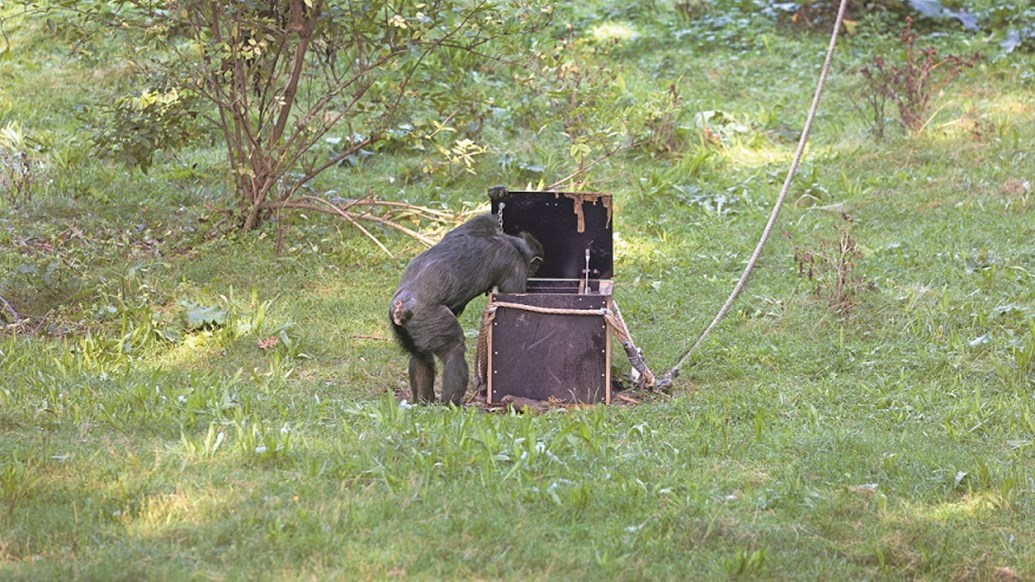 We also trigger the apes with other challenges, such as in the form of dexterity puzzles. In these puzzles—designed by the zookeepers themselves—the dried corn has to travel through a maze until it falls out through a hole in the bottom and can be eaten. Some animals initially try using brute force—the pulling force of an adult male chimpanzee is roughly equivalent to the combined pulling force of about five adult male humans—but they quickly discover that that is not the solution. The secret lies in teamwork; by tilting the sturdy wooden box with its sturdy plexiglass cover at the right moment, the corn kernels roll closer and closer to the hole. Cooperation is the name of the game here, and the intelligent animals have that figured out pretty quickly. Finally, another striking resemblance to humans is that some animals have more patience and perseverance than others!

The above challenges—purely reward-based; the animals are never harmed, and participation is voluntary—simulate the brain teasers that chimpanzees sometimes face in the wild. How can you get the delicious flesh out of a nut with a rock-hard shell? How can you get termites out of a termite mound without the insects biting your fingers? How can you achieve certain benefits by working together that are doomed to fail in a solo endeavour? The challenges we present to the chimpanzees stimulate their intelligence and encourage natural behaviour, even though they would not encounter a puzzle box or enrichment box in the wild. 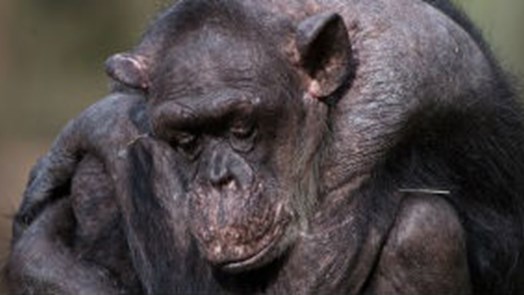