Bats wrongly have a bad reputation. They are often said to be bloodthirsty vampires! If we look at the facts, however, out of 1300 species of bats, only a few South American species are vampires. These are also not the scary vampires from horror movies but smaller bat species that usually drink blood from livestock, such as cows and goats. After a small bite, they drink a few drops of blood, often from sleeping animals. A cow or goat usually barely notices; you could compare it to mosquitoes drinking blood from sleeping humans. The Seba’s short-tailed bats at Burgers’ Zoo mostly eat fruit, which they supplement with insects, nectar and pollen. They drink water in full flight, scooping it from the surface with their mouths in a dive. The animals also exhibit this behaviour at the water feature in Burgers’ Zoo’s cave enclosure—observant visitors can see it for themselves.

Together with fellow zookeepers, Dennis cares for these special mammals, which are relatively closely related to primates—and, therefore, humans. “Once a year, usually sometime in the autumn, we capture all the short-tailed bats living in the cave enclosure in the adventure tunnel between the Bush and the Desert,” he says. “It is important for the welfare of the animals that the males–female ratio is not put under too much pressure. This bat species normally lives in harems, although bachelor groups also occur. When there are too many males in the group, they all try to get the females for themselves. This leads to fights among themselves, which can cause a lot of stress in the group. We aim for a ratio of about one male for every two females.” The most recent census in autumn 2021 found 337 animals living in the cave enclosure: 122 males, 213 females and 2 pups whose gender could not yet be determined because they were still so small that they clung tightly to their mother’s fur. However, the census before that showed too many males living in the group, so 50 males were moved to the Bush. “What most visitors don’t know is that the Bush is home to a bachelor group of Seba’s short-tailed bats. These animals are nocturnal and crepuscular, so most visitors never get to see them. Nevertheless, they play an important role in the ecosystem. When the short-tailed bats eat fruit, they like to carry smaller fruits to their roost. That helps disperse the seed of the fruits. They usually eat larger fruits directly from the tree, somewhat reducing their role as seed dispersers. When they eat pollen and drink nectar, they likely take some pollen with them in the fur around their snouts, thus contributing to plant pollination.”

Besides Seba’s short-tailed bats, the Bush is also home to Rodrigues flying foxes. Rodrigues flying foxes mainly eat fruit, but the main difference is that Seba’s short-tailed bats use echolocation to find their food, emitting ultrasonic sounds—inaudible to humans—which bounce off objects. Their large ears catch the reflected sound waves, and their brains process this information into a mental map of their surroundings. However, flying foxes do not use echolocation and primarily find their food by sight. What is important in caring for these bats? “Seba’s short-tailed bats are true inhabitants of the tropical rainforests of Central America, the Antilles and northern South America. Because of that, their enclosure has a high humidity level: in the tunnel cave enclosure, it fluctuates between 80 and 90 per cent at a relatively high temperature of 23 to 24 degrees Celsius. We check the temperature and humidity twice a day. We have blowers aimed at the windows because they would fog up from the humidity otherwise, and visitors would be unable to see anything,” Dennis says. “We are also very careful when we enter the enclosure. A Seba’s short-tailed bat only weighs around 15 grams, and we have to look very carefully to make sure there are no pups on the ground that have yet to learn to fly properly, for example. By the way, did you know that a Seba’s short-tailed bat eats its own weight in food every day? It’s an incredible feat for such a small animal, isn’t it?”

Seba’s short-tailed bats have a relatively long gestation period ranging from four to seven months because they can extend it in poorer conditions or when under a lot of stress. Such a variable gestation period is quite unusual for mammals. Seba’s short-tailed bats usually have one pup, although twins also occur. At Burgers’ Zoo, we have occasionally spotted bats with two pups simultaneously.

Dennis mentions another peculiarity you won’t easily discover as a visitor: “The pups cling tightly to mother’s fur when they are still very small. As they grow bigger and bigger, they become heavier, and it becomes more difficult for the mother to carry the extra cargo. When they reach a certain age, the larger pups are temporarily placed in a safe place, and their mother will constantly return to feed them. At some point, the pups are old enough to manage independently. They then make their first tentative flights until they can eventually fly as deftly as the adult bats.” 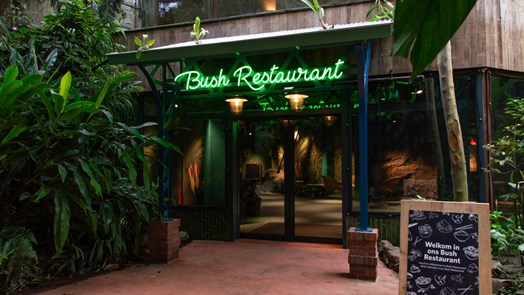 Last summer, the Bush gained some 300,000 new residents! After being kept behind the scenes of the B…