Dive into 8 million litres of water, go on an adventure in the indoor jungle and admire the vultures in our desert! Experience 45 hectares of zoo at Burgers’ Zoo! Unlike traditional zoos, Burgers’ Zoo has eco-displays, where large scale natural habitats are recreated in which animals, nature and visitor roam together. In 1988, one and a half hectares of tropical rainforest (the Bush) was opened to the public.

Step inside and experience the humidity, dense vegetation, smells and sounds of a real jungle. Continue your journey through the Mexican-American rock desert (the Desert), the coral reef in the Indian Pacific Ocean (the Ocean), the plains of the savannah where the giraffes and rhinos wander (the Safari) and the Malay rainforest (the Rimba). Our youngest eco-display, the largest indoor mangrove in the world, is inspired by our nature area in Belize, which we have been managing for almost 30 years! In the mangrove, you can discover butterflies, manatees and many different species of crabs.

On March 31, 1913, Faisanterie Buitenlust, the forerunner of the current modern animal park Burgers' Zoo, opens its doors to the public for the first time. Since its foundation by Johan Burgers, the first owner and the one who named the animal park in Arnhem, the park has always remained a real family business.

Already from its inception the zoo caused a sensation due to its daring new organisation, which naturally is in the way the animals' accommodations are shaped as well as in the way the experiences for the visitors are created. Burgers' Zoo has a rich history, which has shaped the zoo into the way it is today, and as you can still find it now in the wooded area just north of Arnhem.

Burgers' Zoo has five core values. These five values represent our priorities and provide a strategic framework for the choices that are made.

In our vision, we describe how we view the future and what our added value is. We have defined it as follows:

In our mission statement, we have defined why Burgers' Zoo exists and what our motivation is.

We see it as our mission to protect and preserve (endangered) animal species and to let as many people as possible experience the wonders of nature. Together with nature, we want to inspire people, teach people, influence their behaviour where possible and allow them to enjoy everything that nature has to give.

Our core values, vision, mission and location have led to the logo and brand identity we communicate. The focus lies on creating a genuine and adventurous visitor experience. We offer more than just animals; we offer animals in their natural habitat. Each eco-display has its own colour and characteristic plants and animals. Just like in the zoo itself, the brand identity is a voyage of discovery in which you see something new every time.

We will provide them with an unforgettable experience full of amazement, fun and the sense of being one with nature.

Burgers’ Zoo has believed in sustainable entrepreneurship for over 100 years and is the proud owner of the golden gradation of the Green Key. Our zoo and our Safari Meeting Centre have received this award every year since 2004 for our responsible way of using energy and water and our environmentally friendly way of working. We also donate part of our turnover to various NGOs that make a difference in nature preservation. 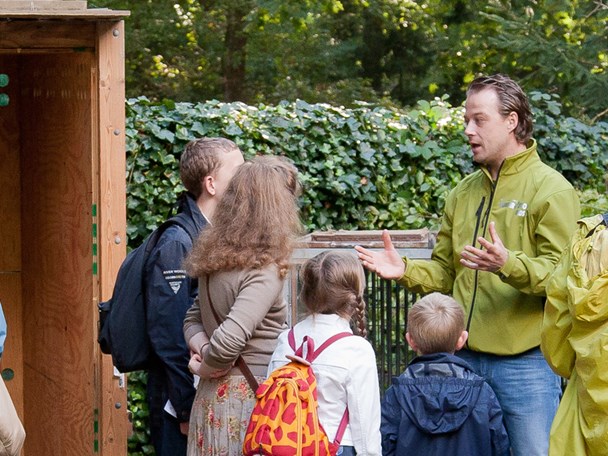 Zoos not only keep animals to give visitors a nice outing, they also want their guests to learn something. The animals do not just represent their wild brethren but also form the connection to their original habitats (biotopes) and the plants and animals that occur there.

In addition, a zoo is an ideal place to further your knowledge in the biology of all those animals (and plants). The basic information for this anyone can get from the information boards at the accommodations, but there are many more possibilities. For instance, there are exhibits, tours, lectures, lessons and practical work and subscribers get a free bi-monthly magazine in which current events are listed with some interesting background information.

Zoos also keep animals to breed with them. This is especially important when it concerns animal species on the brink of extinction and regretfully there are more of those all the time!

For dozens of years zoos have been working together closely to keep these animals from becoming extinct and there are even animals that exist only because of these efforts of the zoos.

Special breeding programs, under which all animal species still present in zoos are listed, must make sure that inbreeding is prevented as much as possible and that its population grows as quickly as possible. About 350 zoos in Europe are involved in this and manage their animals jointly.

For seriously endangered species there is the so-called EEP (European Endangered species Program): these are European breeding programs for which a coordinator sets rules for keeping the animals and whereby he and a number of other experts determine what happens to the animals that are born and which animals are allowed to breed with one another, foremost keeping in mind the prevention of inbreeding.

Burgers' has 35 EEP species in its collection. Burgers' coordinates the EEP for Blue Duikers and King Vulture.In addition there are also species that are less threatened, but which do deserve extra attention. For these there are international stud books, the so-called ESB (European Stud Book), with a Stud Book keeper who carefully registers all present animals and their kind, but who does not give emphatic breeding advice or arranges exchanges.

If a species does not appear to do very well the Stud Book can switch over to an EEP and immediately a stricter policy can be put in place. Burgers' Zoo participates in approximately 30 ESB's and is Stud Book keeper of Aardvarks and Hooded Pittas.

Burgers’ Zoo is affiliated with various Dutch and international zoo and aquarium associations:

We are also affiliated with Club van Elf, a partnership of large recreational companies in the Netherlands.