On Monday 11 November 2019, the spotted eagle ray with the most offspring in public aquariums in the world will be moved from Royal Burgers’ Zoo to ‘Den Blå Planet’ aquarium in Copenhagen. One of the eagle ray's sons will accompany him on his trip to Denmark. The Arnhem Zoo has been the most successful breeder of this cartilaginous fish species in the world for some years now.

No less than 39 offspring

Within the framework of the European breeding programme for spotted eagle rays, the remarkably virile male spotted eagle ray leaves Arnhem to hopefully continue his fruitful work in the group of eagle rays in Denmark. In Burgers’ Zoo's Ocean, this eagle ray managed to breed no less than 39 offspring from various females. Most of these youngsters have successfully matured and now live spread out over public aquariums throughout Europe. The adult females in Arnhem have a diameter of about 1.80 meters and weigh over 90 kilos, while males are much smaller: their diameter is about 1.20 meters and their weight 25 kilos.

The team of biologists and aquarists at Burgers’ Ocean is so successful in breeding eagle rays, various species of stingrays, sharks and corals that dozens of European colleague aquariums have been able to gratefully reap the rewards for years. Thousands of Arnhem-bred animals have been donated to colleagues across Europe and sometimes even outside of Europe as part of European breeding programmes. In the past twelve years, an average of eight hundred animals a year departed from the Ocean in Arnhem.

Since the opening of Burgers’ Ocean in 2000, a total of 62 spotted eagle rays have been born. With this achievement, the Arnhem zoo has been the world's largest breeder for several years now. To achieve the greatest possible genetic variation within the aquarium population, Burgers’ Zoo has received a young male eagle ray from Wroclaw (Poland), which will eventually become the new breeder in Arnhem. 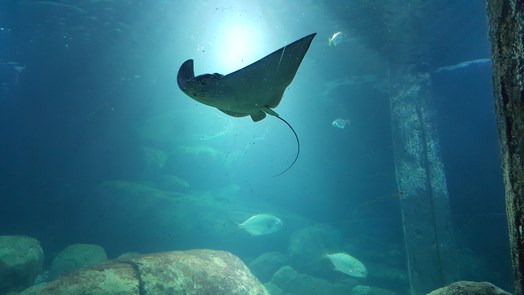