The West Indian manatee cow at Royal Burgers' Zoo is pregnant. Biologists and zookeepers at the Arnhem zoo expect her to give birth in December or January. Recent observations indicate interesting developments in the pregnant female. A live stream of part of the manatee enclosure from above allows interested parties to watch round the clock.

The manatee's belly is clearly growing. At first, zookeepers only noted increased width, but they now also see that the mother's belly is sagging, which may be due to the calf engaging. The manatee cow has recently been seen in areas of the aquarium where she normally does not go, as if she is exploring.

The manatee cow is only eating about half of what she normally eats. We recognise this behaviour from other pregnant manatees when nearing birth. Manatees often suspend themselves in the water, but the pregnant cow seems to have difficulty lying still. The zookeepers regularly see her rocking gently from side to side, probably due to the activity in her belly.

Despite these observations, it is impossible to say exactly when the manatee calf will be born, partly because we have not done an ultrasound. It is very difficult to perform an ultrasound on an animal that lives permanently in the water. Burgers' Zoo wants the pregnant animal to have as much peace and quiet as possible, especially when there is no reason to disturb it. 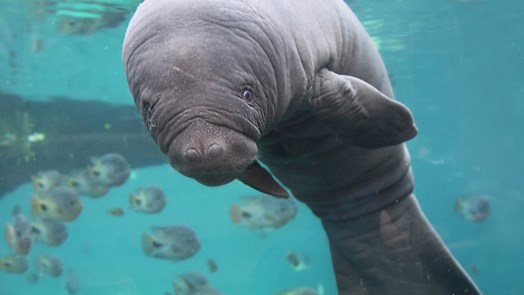