All members of the European Association of Zoos and Aquaria (EAZA) participate in various European breeding programmes for endangered species. 'European population management programmes for endangered species' is actually a more fitting term, as there is much more to it than just breeding. This series of articles analyses the challenges biologists face concerning various specific animal species. In this article: the sun bear.

The European population management programme for the sun bear faces some interesting challenges. There are very few sun bears in European zoos—37 animals at 15 European zoos at the time of writing. Looking at the gender distribution, it is clear that there are significantly more females (25) than males (12).

At first glance, given the number of sun bears in European zoos, it might seem odd that Burgers' Zoo is home to six of these sun bears, but there is a logical explanation. About 2.5 years ago, two sows gave birth to three cubs at the Arnhem zoo (two cubs from one and a third cub from the other; the twins and the other cub have an age difference of more than two months). Breeding sun bears is difficult, so the three healthy cubs were more than welcome! The births of the three cubs confirm that Burgers' Zoo has a fertile boar and two fertile sows. Unfortunately, all three cubs turned out to be female. Any cub is highly desirable, but male cubs are preferred as there is a shortage of fertile boars.

Another challenge for the European population management programme coordinator is that the sun bear population is slowly but surely ageing. There is a risk that more and more adult sows will reach such an advanced age that they will no longer have a cycle and, therefore, will no longer be fertile.

The adult boar living at Burgers' Zoo comes from Edinburgh Zoo in Scotland. It originated from a shelter in Cambodia, where it was taken after being confiscated by the Cambodian authorities. The boar was being kept illegally as a pet by a private individual, a fate that unfortunately still befalls many sun bears, despite ever-increasing protection for these extraordinary animals. The boar fertilised both sows in Arnhem. The sows are sisters who were born in Cologne, Germany. At the time of writing, both sows are over 21 years old (there is an age difference of six months between them), and the boar is almost 18.5 years old.

The coordinator of the population management programme has advised Burgers' Zoo to move the boar to the Sosto Zoo (Hungary) in the spring to provide more offspring there, hopefully. The two adult sows and their three cubs will remain in Arnhem for the time being. The three youngsters may be paired with an unrelated male in future, but that is still ways away as it takes some time for the animals to become sexually mature. 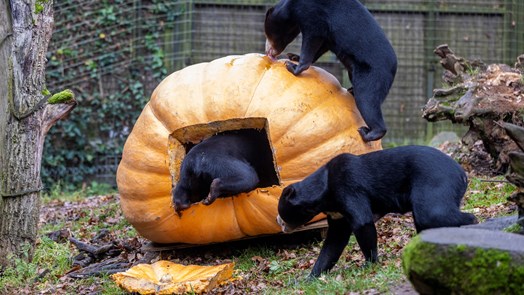 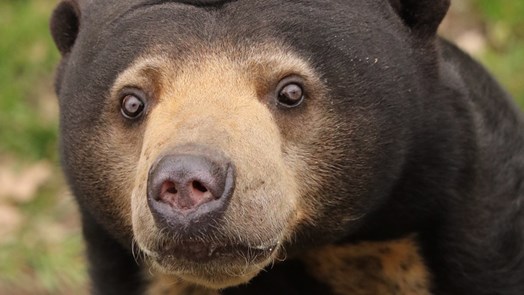