All members of the European Association of Zoos and Aquaria (EAZA) participate in various European breeding programmes for endangered species. Actually, 'European population management programmes for endangered species' is a more fitting term, as there is much more to it than just breeding. This series of articles analyses the challenges biologists face concerning various specific animal species. In this article: the Sri Lankan leopard.

Burgers' Zoo has a successful history of breeding Sri Lankan leopards. On 2 September 2021, another cub was born, which turned out to be a female and is included in the previously mentioned figures. At the time of writing, we have three leopards in Arnhem: a male, almost 12.5 years old, a female, over 13 years old, and the cub is now about three months old.

All our felines, including our young leopards, are vaccinated against feline panleukopenia and cat flu. The vet vaccinates them at about six weeks of age and again at about nine weeks. The opportunity is then taken to de-worm and chip the animal and collect some hairs for DNA research. Not long after the second vaccination, the cub is introduced to the enclosure for the first time under the watchful eye of its mother. However, this does depend on the weather, as we will not take any risks with little leopards.

Current developments in the wild for the Sri Lankan leopard

The International Union for Conservation of Nature (IUCN) publishes the IUCN Red List of Threatened Species, which shows the status of endangered species. The status of the Sri Lankan leopard was recently changed from Endangered to Vulnerable. Despite this positive development, the Sri Lankan leopard population in the wild still faces dangerous threats such as illegal hunting and habitat destruction. However, the situation has improved slightly compared to previous years. Let's hope that in the years to come, we can continue to report positive news about the Sri Lankan leopard in captivity as well as in the wild! 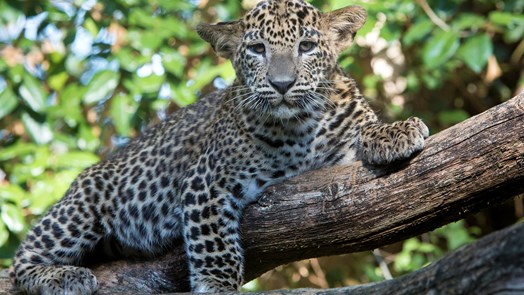