All members of the European Association of Zoos and Aquaria (EAZA) participate in various European breeding programmes for endangered species. 'European population management programmes for endangered species' is actually a more fitting term, as there is much more to it than just breeding. This series of articles analyses the challenges biologists face concerning various specific animal species. In this article: the eagle ray.

As the world's largest breeder of spotted eagle rays, Burgers' Zoo has set up a European studbook and coordinated the European population of these animals in public aquaria for many years. Several years ago, our colleague zoo in Wroclaw, Poland, took over the breeding programme. There are currently 95 spotted eagle rays in European public aquaria: 51 males and 44 females. Six adults are swimming in Arnhem: three males and three females, two of whom are on contraception. We also have five pups, which will likely be moved to other public aquaria soon. 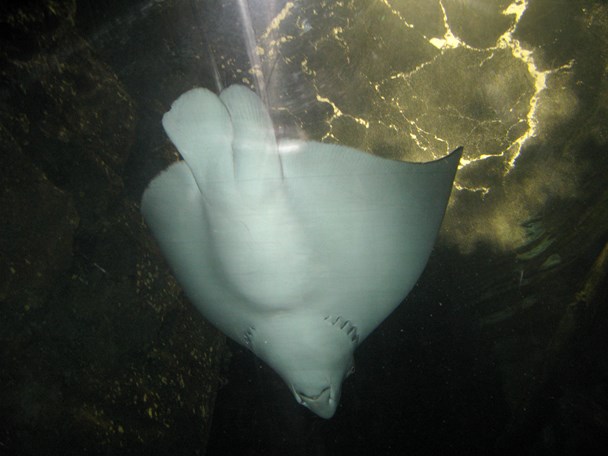 Seventy-one eagle rays have been born in Arnhem since the opening of Burgers' Ocean: 41 males, 29 females and one whose gender is unknown. We have donated a total of 51 eagle rays to fellow aquaria. Five pups are still swimming in Arnhem. What is the key to this great success?

Part of the answer lies in the intensive care provided by the zookeepers who feed the animals individually every day using feeding tongs and record precisely what each animal has eaten and in what quantity. All this data is carefully tracked and analysed to reveal certain patterns. For example, we discovered the duration of an eagle ray's cycle and gestation period. Spotted eagle rays have an extraordinary reproduction method: they are ovoviviparous, which means they incubate an egg inside their body. When the egg's yolk has been used up, the growing pup is fed through the uterine wall in the form of a special liquid. The pup is born as a miniature of its mother.

Another reason for our success lies in the eagle rays' living conditions. The animals must have enough space to display their natural behaviour—swimming. In Arnhem, they have a 1.6 million litres aquarium at their disposal, which they only share with various other rays and some bony fish. This makes for a relatively peaceful environment. The water quality, temperature and the desired flow of the water are critical, and the composition and quantity of food also play a role.

Using DNA research, Burgers' Zoo was the first to scientifically demonstrate that parthenogenesis occurs in eagle rays. Parthenogenesis means asexual reproduction and is derived from the Greek 'parthenos', meaning 'virgin, girl', and 'genesis', meaning 'birth'. Burgers' Zoo designed a technique to conduct DNA research on eagle rays. The eagle ray has one or more poisonous stingers at the base of the tail. A small piece of one of the poisonous stingers is cut off. The animal does not feel a thing; it is comparable to cutting a human fingernail. The severed stinger will grow back over time. There is a very thin layer of skin around the stinger from which DNA material can easily be extracted in the laboratory. Genetic research is also carried out to find out who the parents of a certain animal are. We have managed to determine parthenogenesis in some young eagle rays.

Burgers' Zoo has also demonstrated another extraordinary phenomenon: twin siblings (eagle rays often have one young, but sometimes two and even three at the same time) can have different fathers! This phenomenon also occurs in Greek mythology; demigod and superhero Heracles had a divine father (Zeus) and a mortal mother (Alkmene). His twin brother Iphikles had a mortal father (Amphitryon). According to the myth, Zeus had disguised himself as Amphitryon to seduce the unsuspecting Alkmene, who also turned out to be pregnant by the real Amphitryon.

However, Burgers' Zoo's breeding success with spotted eagle rays—at the time of writing, 71 youngsters have already been born in Arnhem—also poses an interesting challenge for the future. To achieve the greatest possible genetic variation, we must avoid a situation where all eagle rays in Europe can be genetically traced back to Burgers' Zoo. Partly for this reason, three of the current adult females in Europe—two at Burgers' Zoo and one at Boulogne-sur-Mer—have had a contraceptive device implanted as they have already produced more than enough offspring. It is now the next generation's turn. All pups are distributed among the various public aquaria in Europe using parental determination to prevent inbreeding. It is good to see that three other aquaria are also breeding with the species. Two of those aquaria have bred with eagle rays born in Arnhem, so the second generation is already swimming around in various locations in Europe!

Burgers' Zoo shares much of its knowledge and expertise of breeding spotted eagle rays through lectures and scientific publications, hoping that more and more European colleague aquaria will successfully breed the species in the future. We must keep the aquarium population as genetically diverse as possible, which is important to maintain a healthy population in the long run. We are, therefore, strongly in favour of intensive international cooperation between public aquaria. 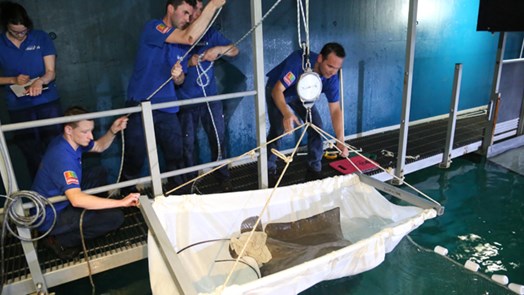