Last summer, the Bush gained some 300,000 new residents! After being kept behind the scenes of the Bush/Desert for several years, a colony of leafcutter ants (Atta cephalotes) has now been moved to an innovative and unique home located at the heart of the Bush. Unlike the case in many zoos, these worker ants are not marching pieces of leaf through Plexiglas tubes but are seemingly roaming free! As small as they are, these unique animals garner a lot of visitor attention.

There is much to say about these highly social insects with a strict division of labour and hierarchy. But, in this issue of ZieZoo, we will focus only on the part of their lives our visitor cannot see in the Bush—their unique symbiosis with fungi. This symbiosis normally takes place in the underground colony in the wild, but at Burgers’, it happens in terrariums in a shielded, dimly lit hut.

There are dozens of species of leafcutter ants in South America, spending their days transporting millions of tiny pieces of leaves and blossoms to their colony. There, they grow fungi on chewed plant material. The fungal threads are their main food. For the ant larvae, they are the only food. This form of horticulture by ants has evolved more than once; leafcutter ants come from two different biological genera. Yet, it occurs exclusively in (sub)tropical America; no leafcutter ants have been found in the wild on other continents. These little insects have perfected symbiosis, especially the species of the genus Atta, who now also live in the Bush. According to scientists, this collaboration began some three million years ago! Atta leafcutter ants and the fungus Leucoagaricus gongylophorus are fully dependent on each other. 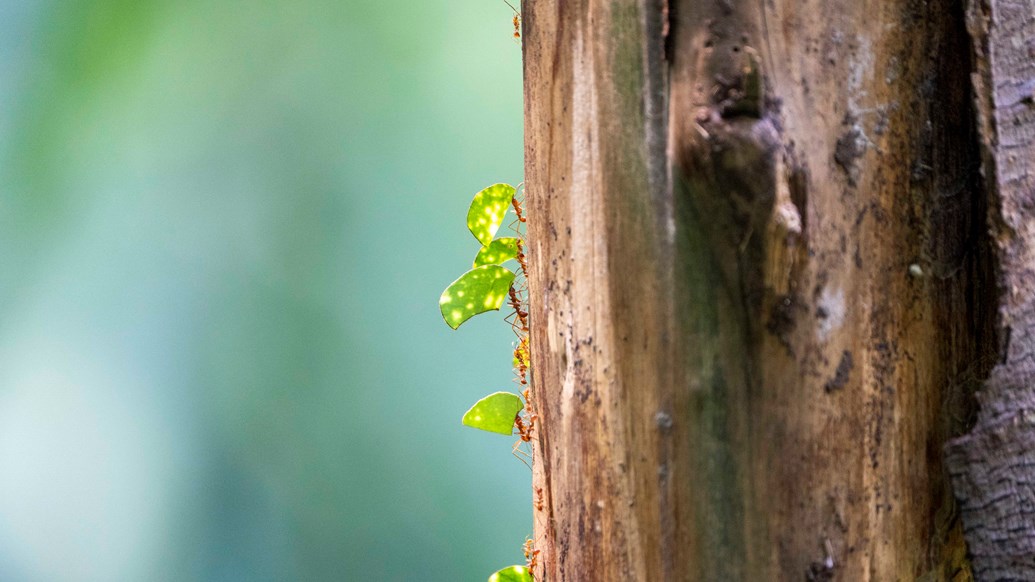 Only in ant colonies

Leucoagaricus gongylophorus is a fungus with no common name in either Dutch or English and is related to the mushroom. Unlike humans, the ants do not eat the fruiting bodies of the fungus—the mushrooms—but munch on the fungal threads, the hyphae. The ants bring suitable plant material to their colony and process it in as many as 29 steps into a kind of pulp, which they spread on the fungal threads. Tiny worker ants then stuff the chewed, ball-shaped plant matter between the fungal threads and add a drop of faeces. Fungi can break down organic materials, including cellulose and lignin found in leaves and wood; these long-lived carbohydrates are indigestible for animals. Collaboration thus unlocks a virtually infinite food source for the ants! The leafcutter ants give the fungi the appropriate nutrition and fertiliser and keep the fungal threads clean and remove parasitic fungi. They pamper their chosen fungal species so much that Leucoagaricus gongylophorus is now only found growing in Atta leafcutter ant colonies!

The ant colony has unreservedly tied its fate to the fungus. If the fungus does not do well or dies, the colony won’t survive. Sometimes the ants temporarily try to steal fungus from neighbouring colonies, but that is not enough for the survival of a colony. When a new colony is founded, the swarming princesses carry a small amount of fungal threads and growth substrate from their old colony in a pouch near their oesophagus. Just enough to feed themselves and the first dozen hatching workers, who then go to work leaf-cutting and gardening. The fungus in the new colony is essentially a clone of the old one! A fantastic symbiosis with a delicate balance.

In future, Burgers’ guides expect to be able to show the fungus nursery to interested visitors, for example, on guided tours. For more fascinating examples of symbiosis, follow the new series of articles on our website!